CO2= P (people) x S (services per person) x E (energy per service) x C (CO2 per unit energy). This equation is probably not new to you. But what is really behind it?

Let’s have a look at the first two data of the equation, People and Services : the current world population of 7.6 billion is expected to reach 8.6 billion in 2030, 9.8 billion in 2050 and 11.2 billion in 2100, according to a new United Nations report. If we sum the higher life expectancy, the improved quality of life in emerging countries such as India, China, Brazil, the increase in energy demand is ineluctable. In other words, with People and Services increasing, we can expect CO2 emissions to follow the curb (source UN).

How can we prevent such a scenario?

In order to prevent such catastrophic scenario, we can still act on the two other elements of the equation: energy and emissions. Today, still more than 90% of our energy is supplied by fossil fuel (source IEA). This means, our energy supply generates CO2 emissions. What is more, it is known that more than 30% of energy is wasted due to ineficcient usage (mainly in buildings and industrial sectors).

In response, a number of legislative instruments have been introduced. The new EU regulatory framework (the new Energy Performance of Buildings Directive, the Energy Efficiency Directive and the Renewable energy directive) intends to improve the situation with a comprehensive approach. It sets targets related to the two last elements of the equation, Energy per service and CO2 per unit of energy produced:

Among the measures foreseen in the EPBD, we find two particularly interesting to us :

With this framework, Europe will be equipped to complete the clean energy transition and meet the goals set by the Paris Agreement.

Are such measures really efficient? 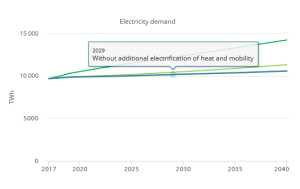 When we look to the future, the pace of electrification is going to take off in advanced economies. Nevertheless, electricity demand growth is foreseen to stagnate in the scenario new policies are applied. In conclusion, we can say that improvements in energy efficiency continue to act as a brake on increasing demand (source IEA). And it is the only way to counterbalance the increasing dependency on energy.